Turn your biggest fans into monthly paying members
Give something to your fans and get support in return
Questions? Let’s get started!

Use subscription boxes to sell your band's merch, and triple what you would make on Patreon

Read on to see how a reggae group based in Oakland, CA, turned a successful merch store into a recurring revenue stream worth a substantial amount. Stick Figure’s average membership on Withfriends is 300% the average Patreon donation.

Stick Figure, an independent reggae group, has been running a successful merch store on Shopify, with fans all over the country buying t-shirts, hoodies, and even Stick Figure-branded tiki mugs.

Withfriends makes it possible for Stick Figure to connect with their fan base all over the country by selling memberships with every purchase on their merch store. Using our Shopify integration to generate profitable pricing and benefits for their Stick Fam, On The List, and Band & Crew tiers, they launched a little over two months ago and their growth is surging!

Give something to your fans and get support in return

Stick Figure gave something in return to their huge fan base, tripling their average membership over what they would have earned on Patreon. This was something they were already making, so it didn’t require any additional work.

Stick Figure integrated memberships into their core sales channel through Shopify, ensuring that they would automatically be announced to the widest number of fans. Because the store was already active and the integration is automatic, this didn’t require any additional work either.

In two and a half months, Stick Figure has grown to 363 members!

As vital as this kind of revenue is for every small business, the most valuable part is the deeper engagement it fosters with these members, represented by the glowing testimonials left as they sign up, and shared online. Here’s a small sample of the vibrancy of Stick Figure’s community! 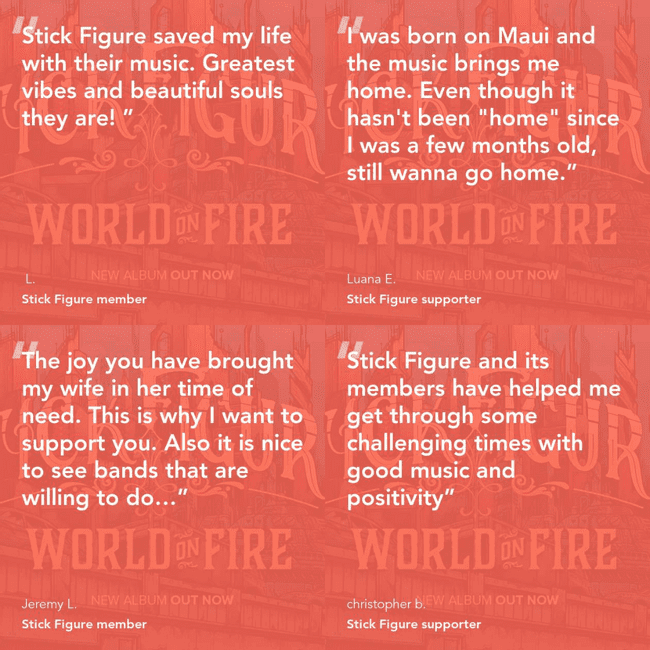 While the Stick Figure community is quite unique, with the tools Withfriends offers you can start building your own membership community right now with your existing customers.

If you have any questions about this article, we’d love to hear from you! Drop us a line at team@withfriends.co, and while you’re at it get started setting up your own membership program. We’d love to hear what you think.

Get in touch to learn more.

Withfriends makes it easy to sell memberships for any business. Whether you run an online e-commerce store, a music venue, or a brick-and-mortar bookstore, you can use Withfriends to build sustainable recurring revenue for your business or organization.

Curious who else uses Withfriends?

We've got everyone from music venues, to restaurants, to bands selling merch direct to fans, to farm-to-table produce operations on Withfriends.

Check out all our organizers.